An extreme or irrational fear of or aversion to something: “he had a phobia about being under water”; “a phobia of germs”.

Phobias, we all have them (don’t we?), some are just more severe than others. I am plagued with arachnophobia, a fear of spiders. This isn’t just your normal everyday average squeamishness, it’s a dreadful, overwhelming fear that defies all logic. I mean, I’m an otherwise intelligent adult but I am convinced (truly, honestly convinced) that all spiders are after me. Big ones, little ones, fat ones, skinny ones, black ones, brown ones, hairy ones, clean-shaven ones. They are all after ME personally.

Crazy, right? But wait, it gets better. I believe they get together in little spider conspiracy groups and deviously plot tactical ways to kill me, outlining their strategy on colorful maps with charts and graphs created with little spider apps on their little spider iPads. So yes, even to the casual observer, I think my fear of spiders probably falls into the illogical, irrational and therefore, phobic, category. Note: My arachnophobia should not be confused with my (not so) illogical fear of insurgent suicide bombers, known as Iraqnophobia. That’s a creepy thing too, but of a completely different sort.

Spiders are the one thing that I just don’t have a sense of humor about. I can laugh at just about anything, but don’t ever, Ever, EVER play a joke on me with a spider – not a real one, not a fake one, not a picture of one. I promise you, I won’t find it funny and I will hate you for life. I don’t know where this phobia came from, but I’ve had it for as long as I can remember. So, how arachnophobic am I? Well, I don’t even like typing the word “spider” but here are a dozen examples:

1. I’ve actually had nightmares where spiders have spoken to me, taunting and threatening me.
2. As a child I wouldn’t touch the “S” volume of the encyclopedia because there are pictures of big, fat hairy spiders in there – usually in living color. Whenever we had to do reports for school, I avoided any topic that started with the letter “S.” No reports on Spain, South Carolina, Saturn, or Sousa.
3. I won’t open a National Geographic magazine until it has been reviewed and declared safe by someone I trust.
4. I hide my eyes during commercial breaks on Animal Planet because there are often spiders scurrying across the screen during station identification.
5. I won’t even consider watching a movie or TV show that has even one spider scene in it. As a result, I’ve never seen Harry Potter, Fear Factor, Survivor, etc.
6. I once cancelled a family vacation to a Dude Ranch in Arizona when the manager casually mentioned they “occasionally” saw tarantulas under the cabins. We took a cruise instead – no spiders in the middle of the ocean!
7. I avoided the front door to my house for a full six months because a spider tried to attack me there. The spider was killed, but its relatives were waiting to avenge his death so I had to wait until after the first blizzard of the season.
8. I was once cornered for FIVE hours by a spider who was (apparently sleeping) over the doorway of my living room. Couldn’t bring myself to walk under him and as repulsive as it was to keep an eye on him, I was afraid if I didn’t, he would crawl off and disappear and then I couldn’t go into the living room again because I wouldn’t know where he was.
9. Love Halloween, but hate the whole spider decoration thing. I once fled my local bank in panic when I walked through the door and was confronted with… oh… about a BAZILLION spiders hanging from EVERYWHERE! I called the Branch Manager to complain. Stupid woman, yes I KNOW they’re plastic – I don’t care.
10. Tool sheds, barns, gazebos, any open wooden beam structure is my architectural nightmare, requiring constant 360 degree spider scans. Same goes for walking under trellises, trees in the summer, or near grape vines.
11. When I see a spider or open a book and see a picture of one, my palms turn red and start to itch. Don’t ask, I have no idea.
12. If you really want me to hate you, just laugh and tell me: “That little thing? Why, he’s more afraid of you than you are of him.” No, no he isn’t. Because if he was he wouldn’t seek me out in a room full of people, rappelling from the ceiling on his Silk Thread of Death like an SF soldier on a mission. Don’t even get me started, I could name a hundred examples. And what is a spider doing in a room full of people anyway if they are so afraid of us? I wouldn’t walk into a room full of spiders. You know why? BECAUSE I’M AFRAID OF THEM, that’s why!

And THAT, my friend, is fear.

But things may be getting better. I killed a spider last night. A big one. It was running across the living room floor straight for me and Esteban wasn’t home to intervene. I ran for the RAID, keeping an eye on the bold intruder (yes, he was so big I could see him from the next room!). Unable to find my weapon of choice, and in a moment of sheer panic, I closed my eyes, held my breath, and crushed his miserable little head with the long-handled dustpan.  Over and over and over again.  I couldn’t believe I engaged in close quarters combat with a spider, but there wasn’t an AK47 handy and at least the handle provided a bit of standoff.

I let him lay there in a crumpled heap for an entire episode of “Will & Grace” just to serve as an example to the rest of the 8th Arachnid Army who watched from their foxholes as he died a slow, painful and somewhat gooey death. As the closing credits rolled, it was clear he was not going to come back to life and try to make an escape, so I used the broom to scoop him onto the dustpan. Holding the dustpan-turned-arachnihearse as far in front of me as I could, I very gingerly brought him to the WC and unceremoniously dumped his carcass in the toilet, amazed at my bravery and ability to remain cool under fire.

And what do you suppose happened next? Well I’ll tell you what happened. He hit the water and sprang to life, scurrying across the TOP OF THE WATER on eight furry black legs like some kind of resurrected water-walking Jesus spider, and scrambled up the side of the bowl! I couldn’t believe my eyes. There was mass confusion and chaos, and in the background I could hear someone screaming and using foul language not suitable for this blog – it may have been me, but I can’t say for sure.

Through the fog of war, I spotted my weapon of mass destruction and flushed his ass straight into the septic system. I watched breathless, heart pounding in my ears, as he circled the bowl, eight tangled legs flailing desperately against the tide, until he disappeared into the Great Beyond. Panting and shaken, I stared long and hard at the bottom of the toilet, expecting him to burst from the black hole stronger, meaner, and scarier – grabbing my arm and attempting to pull me into the watery grave with him – like the final scene in “Carrie” where Cissy Spacek’s arm thrusts from the grave and grabs Amy Irving.

Amazingly, that didn’t happen. But I’m not stupid, and I’m not naïve. We’re talking about a spider who had the intelligence to fake death on the living room floor through an entire episode of “Will & Grace!” I’m sure, like Jason Voorhees, he has escaped death and is out there once again…waiting for me near the front door with an entire Army of his friends, a tiny Purple Heart pinned to his chest. Game on, little spider, game on.

Is my French accent that obvious?

My husband’s compulsion to correct the pronunciation of even MADE UP words is rivaled only by native French-speakers. 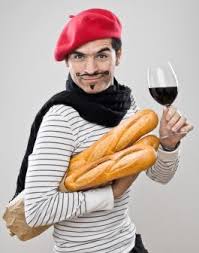 Protected: Dear US of A